After a year which wore out its welcome sometime in August, I’m really hoping for a better 2017.

Sure, a few great things happened in 2016 – I took two terrific vacations with the family (Jamaica and San Diego, CA), my near two-year battle with dizziness came to an end, and the Cubs won a World Series but on the whole, hope seemed hard to find.

I grieved for the loss of human beings who inspired me – David Bowie and his art of reinvention, Umberto Eco whose pinball scene in Foucault’s Pendulum is sexy perfection, and for Carrie Fisher, who lived life with such fearlessness, wit, intelligence and honesty that for this child of the 70s at least, she was a role model of both what not to do (the drugs) and how to live. When Mohammad Ali died, I grieved once more for my grandfather who died from Parkinson’s disease 35 years ago. And I grieved for my grandmother-in-law who passed away in the spring.

I grieved for the loss of civility, and for my hometown, the City of Chicago, which seems incapable of stemming the tide of violence.

In 2016, I suffered many professional shortcomings. I expected to end the year with an agent, or at least a contract. I put forth a solid effort, but simply put, I failed. It’s not a good feeling, even though I understand that larger industry consolidations make it harder for a well-reviewed mid-lister like myself to break through that magical ceiling that divides the best-sellers from the rest of us. It’s easy to get down and think about quitting, but then something magic happens.

January first, 2017 is a new day. My calendar is not entirely blank, but it may as well be a clean slate. Today, I will do some serious exfoliation and scrub off 2016. As of this writing, no-one has died in 2017, so there is no need to grieve. No-one has teased my children or been unkind to them. No-one has told me no. Look out 2017, here I come.

I’m a huge fan of games, note I did not write board games, or card games or video games. I love them all. In this season of giving, whether to a loved one or to a toy drive, here are five games I highly recommend because not only are they fun, but they can also be adapted to accommodate a range of ages. I’m not part of any affiliate program. The links are there for your convenience.

So there you have it – some awesome ways to spend the time with friends and family throughout the winter. With these games, your only awkward discussions will involve what to play next.

If you have a favorite game, please share it below. Thanks.

If you’ve followed me on social media or on this blog, you may have noticed I’m a passionate supporter of the Teal Pumpkin Project to ensure even those with food allergies can have a safe and happy Halloween.

My daughter has severe peanut allergies and as much as we love Halloween around my house, it is a high-risk period because, let’s be honest, how many of us can resist a Reece’s? My daughter, yes, but some kids snack on a few and then dig their hands into a bowl filled with all kinds of treats and spread that peanut-butter around and let’s not talk about school lunch the next day. Instead, I’m offering 5 ways to get your house ready for a safe, fun and happy Halloween. 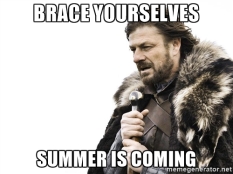 For many of us, summer means vacation and extra family time since the kids are out of school. In my house, this means hanging out with friends and being outside until past sunset. But sometimes, the weather doesn’t cooperate. For those times we are stuck indoors, we break out the games.  Here are five fun and portable games that are great to play inside or outside, at home, at the cabin or in a hotel.  And yes, these will work for those of you in the Southern Hemisphere too.

Being a parent has taught me myriad lessons. For one thing, I learned I needed to apologize to my mother as in this post from the past. In honor of Mother’s Day, here are five other lessons motherhood has taught me.

The last two weeks, I’ve treated you to book recommendations for Middle School readers and for Elementary aged readers. This week, I’m sharing five terrific picture books.  I’ve given priority to books that have been released this year. As before, I’m including buy links to Amazon and Barnes & Noble for your convenience. I do not benefit financially in these recommendations, I just want to share books I love to help those who are looking for a book to give to a child.

Kids that are read to from day one are kids who grow up to be readers. Study after study shows the benefit of reading with children. From building vocabulary to creative problem solving, to building empathy, to creating a passion for knowledge, few tools on this earth are more powerful than a book. Please share the joy of reading this holiday season, whether with a special child in your life or by donating a book to a school, shelter, library or program like First Book.

I hope you have enjoyed this extended Friday Five series. If you have books to recommend, or thoughts on this list, please share in the comments.

I’ve invited a special guest to share some of her favorite books for Middle School and Teen readers. Four of the Five are series specially selected by one of the loveliest young ladies I know. Without further ado, my twelve-year-old daughter is here to share her recommended reads for Middle Schoolers.  As with last week’s bonus post, “Great Books for Elementary Schoolers,” I’m including buy links to Amazon and Barnes&Noble for your gift-giving convenience, but don’t overlook other sources too. I make no money on any of these sales. My daughter and I want to help you find great reads for tweens and teens in your life.

There are multiple other books that did not make it onto this list. My daughter hopes that if one liked these recommendations, you’ll might explore other books and series by the author. Erin Hunter and Brandon Mull have multiple series she recommends. Erin Hunter also writes the Seekers and Survivors series. Brandon Mull also writes The Five Kingdoms, Beyonders, and The Candy Shop War Series. Sequel series to Fablehaven and The Unwanteds are coming out soon.

Quick – now that she’s out of the room, if you have any recommendations, please list them in the comments. I can hardly keep up with all her reading and as a parent, that’s a wonderful problem to have.

I walk my kids to their respective bus stops each morning, even on the coldest days. Not only does it give me a bit of uninterrupted time to chat with each child, but the experience is truly educational.

Here are Five Things I’ve Learned from the Five Children at the Elementary School Bus Stop.

Let’s be honest, I do way more than five things for my kids. Every parent does. But as this post goes to publication, I am chaperoning 250 sixth graders on a five day-four night field trip and doing so voluntarily. Or at least at the behest of my daughter.  In tribute to this event, I came up with a list of five things I do for my kids that have changed my life for the better.

You can get Valentine’s tips anywhere, so rather than celebrating romance with my First Friday Five, I’m sharing

Five flaws an editor would point out you wrote a tween girl as they actually are.

Let your inner editor free in the comment section. I’d love to know what you think.

Join my newsletter for books and recipes

There was an error retrieving images from Instagram. An attempt will be remade in a few minutes.